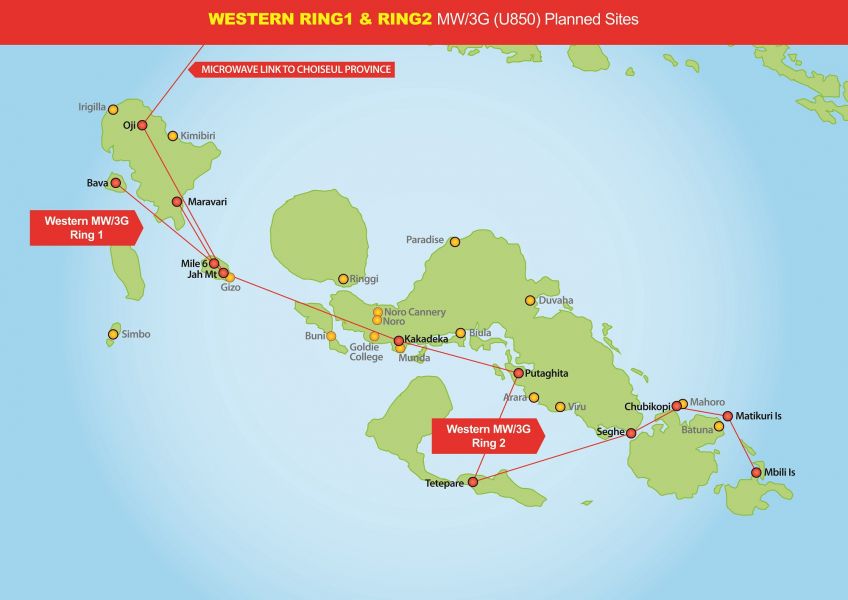 Our Telekom has recently completed construction of three (3) new 3G mobile sites in Vella La Vella and Gizo and currently carrying out civil works and tower structure builds in New Georgia and Marovo lagoon to further expand and introduce 3G mobile service reach in the Province. The new network additions and upgrades in Western continue our 2nd Business Transformation Project momentum which involves mobile network expansion in Honiara and the Provinces in 2017 & 2018.

Western Province continues to be a busy communication provincial market; mostly due to a relatively higher level of commercial activity and infrastructure presence especially in its town centers, despite a declining yet significant logging operation presence and a growing tourism operator network and tourist destination market. The rural areas however face the same communication access challenges that exist in our other rural communities nationwide. “Despite the challenges, Our Telekom continues to pave the way for economic activities by building telecommunication infrastructure in connecting our islands to the world’, says, Loyley Ngira-Our Telekom Chief Executive.

Our Telekom has now embarked on revisiting its mobile network footprint initially established in the province, filling in access and connectivity gaps in places where there were no mobile service coverage previously and most significantly introducing modern 3G services, with mobile Internet and voice to the people.

As part of this Project, three (3) new 3G sites have been commissioned and in operation at Vella la Vella and Gizo.

In addition to the extension of 3G network to Vella and Ranonga and improvements to West Gizo coverage, a major 3G network build is progressing from Mbili Island near Gatokae at the entrance to Marovo Lagoon all the way to Munda and to Gizo and beyond. This 3G network rollout will ensure the busy commercial sea lane from Marovo to Gizo is fully covered with no-break 3G coverage including the introduction of 3G mobile Internet and voice services to the rural communities from Gatokae and Vangunu, through Marovo Lagoon to Tetepare & Rendova, South New Georgia and Roviana lagoon to Munda.

Coverage for Gatokae, East Marovo and parts of Vanunu.

Coverage for central Marovo, New Georgia and parts of Vangunu.

These towers are planned for completion by middle of December 2017 with 3G mobile service online in time for Christmas 2017.

Our Telekom wishes to thank the communities, land owning tribes, and the Western provincial government for their continuous cooperation in allowing their lands to be developed for the provision of modern mobile communication services for our people.