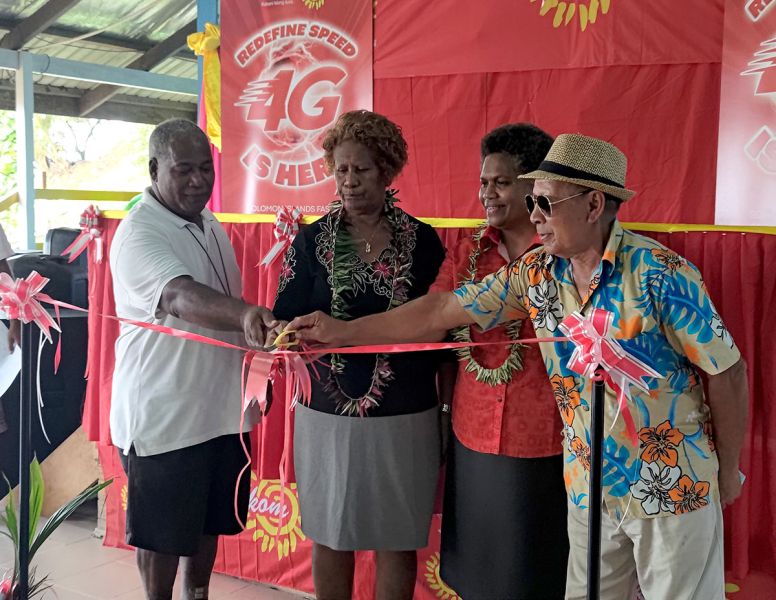 Our Telekom customers residing in and around Buala and San Jorge have, over the past weeks, begun enjoying the newly upgraded 4G towers in Tasia and San Jorge.

New 3G sites at Hageulu, Tanavei,Tirotue, and Ghoveo have also given cause for much excitement for residents, with a formal launch for all new sites set to take place this weekend in Buala this Friday 13th May and Ghoveo, Saturday14th May. The formal launch will relatively be low key to ensure we observe covid protocols.

The rollout in Isabel marks the final phase of Our Telekom’s 2nd Business Transformation project, which commenced in 2018. This phase concludes the final 3G build nationwide. This year’s other proposed new builds will be for the special communication project funded by the Australian Government; 4 sites at Shortland Border, 1 at Kia, and 1 at Pelau. 2018 saw the beginning of Our Telekom’s implementation of the newly introduced 3G 850Mhz technology, which was intended to boost capacity by adding to the existing 3G 2100Mhz tech. Malaita and Western Province were the first to receive these new upgrades, followed by Guadalcanal, Choiseul, Makira, and finally Isabel Province. Also coinciding with the rollout were the 4G upgrades deployed to key UBC sites nationwide.

Since Monday 9th May, the prepaid sales team has been selling mobile handsets to ensure the people in Isabel can enjoy the benefit of high-speed internet access, quality calls, instant messages, and signing up top-up agents around villages in Isabel.

In an ever evolving technological landscape, the need for faster and smarter telecommunication networks has never been, at any time in history, more crucial to the surge of human advancement. From social media networking to the Internet of all things, the seemingly mundane has inevitably become digitized, a norm in this day and age.

Global trends have seen an uptake in 4G and 5G networks worldwide as service providers scramble to meet the increasing demand for faster internet speeds. Thus, Our Telekom is at the forefront to pioneer technological advancement in the telecommunication industry and remains the number one telecommunication provider in the country.

While the Solomon Islands is a relatively small market, there is still rising demand for improved coverage and faster internet speeds.

To meet this demand, our Telekom has invested millions in its 2nd Business Transformation Project, which will see new mobile tower builds and the eventual phasing out of 2G for faster 3G and 4G technology. In addition, our Telekom will continue to optimize tower performance and antennae re-alignments for further signal reception improvements based on customer feedback in coverage areas.

Our Telekom is committed to ensuring all segments of our people benefit from fast and reliable Internet access. Hence, despite these challenging times, we invest millions of dollars in communication infrastructure and upgrades to connect our nation’s islands and remote communities.

Also, the presence of the submarine fibre optic cable promises to enhance the mobile Internet experience and open up new exciting opportunities that will revolutionize how we work, do business and interact with others digitally.